In lighter conditions, I use the the Gaastra Poison 5.4m² on the Naish Hybrid.

Gullane gets several days each year of extreme conditions, so even the small sails are used regularly.

Light weight masts and booms make sailing more fun. I use C75 or C100 standard diameter masts from Severne and Gun. I have two Aeron reduced diameter booms, which are a joy to use.

As I make several visits a year to Tenerife, I now have a set of windsurf equipment for use there. I also hire other equipment in Tenerife according to the conditions.

The replacement is a Fanatic NewWave 2006. 239 cm long, 69 L, 53 cm wide. Like the RIP, it is light weight, and very fast over the chop. The shorter length helps it gybe even easier. The lower volume means that the tail tends to sink when the wind drops.

The board sails very well with my Gaastra 4.7m² and 5.4m² sails. It is a fast board, but lacks the control which is needed in stronger winds.

It was run over and badly crushed in the car park at Gullane in June 2008, so is no longer in use.

It is certainly not a fast board, but gives much more control in stronger winds than my previous board.

You'll recognize this board on the beach by its striking graphics. It isn't a jungle tiger, but a guerilla with stripes!

It sailed well with my Gun FreeRace 7.0m² sail using a 34cm skeg in fairly light winds. A 32 cm skeg seems insufficient for the 7.0m², but a 36cm skeg threatens to turn the board over.

With a smaller sail, it is quite bouncy on chop at Longniddry, going over the chop rather than through it. It certainly gives the feeling of speed.

Within six months of new, I have had to repair two small holes in the top surface of the board. One seems to have been caused by the impact of the boom, and the other perhaps when changing sails. This board is clearly quite fragile. It is built very much in the manner of an egg shell. Repair seems to be easy using white epoxy.

I used to do a lot of sailing with the Enduro and Matrix 6.0m². and found I get good sailing in fairly light winds.

The Naish Hybrid Slalom is very much an updated version of the Enduro. It is an ideal board for a small lightweight sailor who can waterstart. It is fast, flies upwind, copes well with small chop, and will handle a 7.0m² sail.

The short length helps it gybe exceptionally well, especially on waves. It is smaller, lighter and more fun than the Enduro.

At Gullane, the Hybrid works well with sail sizes from 4.7m² to 6.2m². My favourite sail for this board is the Gaastra Poison 5.4m².

I have acquired a second board which I keep in Tenerife. I also have Gaastra Poison 6.2m² sails. So I can sail in lighter winds when most of the kiters are on the beach.

In Tenerife, the Hybrid does not like too much wave or chop, so it is not usually the best board in 4.7m² conditions.

With a larger fin, it copes well with a 5.4m² sail. In Tenerife, when the waves and chop get nasty, you need a more specialist board.

The Gaastra Matrix 6.0m² is light and powerful. It was fun to sail with my Naish Enduro and quickly became my favourite sail for light wind sailing.

This sail has not been used much recently. You are more likely to see me on the Naish Hybrid than the Enduro. I have also bought a Gaastra Poison 6.2m², which is more powerful. I have now sold this sail. 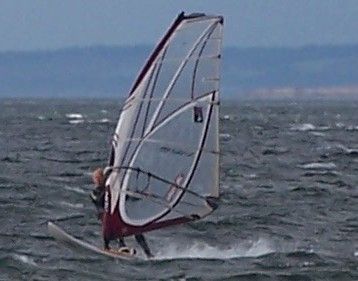 The WaveMc sails are powerful sails with a solid feel. I have been using them for some years, and have been very happy with them.

In recent years, there have been problems with build quality, but this does not effect performance on the water.

I have stopped using these sails, as I prefer the Gaastra Manic sails.

These sails have now been sold.

The Gaastra Manic sails are a lot flatter than the WaveMc sails, and very different to sail and to waterstart! As flat sails, they are better in overpowered conditions.

This sail broke in the shorebreak at Longniddry.

These Ezzy sails replace my Gaastra Manic 4.7m². The variable head means they will rig on either 400cm or 430cm masts. They are solid sails, very powerful, and can be rigged with more or less power according to conditions.

In Tenerife, I like lots of power for gybing on the waves in gusty winds.

Because of the shape in the sail, they are more difficult to get out of the water when the waves are strong. 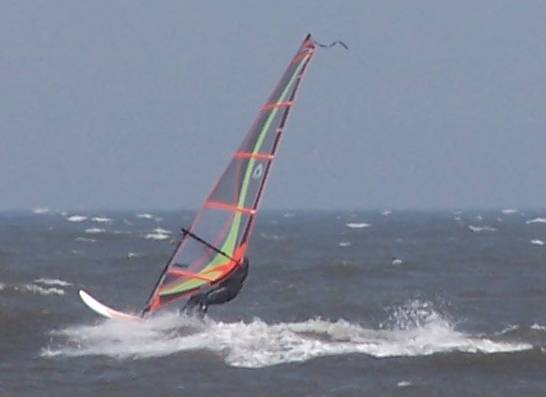 The Gaastra Poison 5.4m² is a very full bodied, powerful sail, with even more built-in shape than the WaveMc sails. It sails very well with my Naish Hybrid. and serves very well as a large sail for my Guerilla.

I have a Gaastra Poison 6.2m² (2008), which is a powerful sail for use with the Naish Hybrid or Naish Enduro on light wind days.

Though this is a heavier sail than the 5.4m², it performs well and allows me to get out when the wind is light. It is a strong sail which keeps on working when the wind increases and copes well with waves.

I have broken two Gaastra sail pulley blocks over the years. These were a Manic (2005) and a Matrix (2005). I am now very careful how I rig Gaastra sails.

in July 2010 I met a guy in Tenerife. He was out sailing at the harbour wall with his Manic 2010 when the pulley block broke. Fortunately he was able to get back to the beach with his kit.

This is the second 2010 sail he has broken. The first was repaired under warranty. Even though the sails have been repaired as good as new, he is now afraid to use his Gaastra sails.

The problem is that the block is held together by a thin inner cylinder of metal which is bent over the ends, like a a rivet. It is safe if the rope pulls downwards, but most mast extensions run the rope in from the side. If you rig the sail close to the foot and pull down hard, the rope spreads the pulley block, and it breaks.

The importance of this problem should not be underestimated. When the pulley block breaks, there is nothing to hold the mast and sail to the mast extension. You could be left out at sea holding just the sail, with the board making its way to the horizon. As in Tenerife, there could be strong winds and large waves, and you could be a mile away from the beach.

As far as I am aware, Gaastra are continuing to sell sails with this fault.

If you break the pulley block, provided you have all the parts, you can repair it easily. Use one of the bolts from an old boom to replace the inner metal cylinder. The repair is much more solid than the original!

For links to windsurf equipment manufacturers and suppliers, see